New commissions for period instruments, fresh interpretations of old repertoire, courageous and innovative working methods, unique concepts that engage a diverse audience – FiBO offers all this while being an influential force in the Nordic cultural scene.

Founded in 1989, the Finnish Baroque Orchestra has consolidated its position within the Finnish orchestral scene. Since its inception, FiBO has collaborated with some of the foremost soloists and concertmasters of the age and performed a wide-ranging repertoire. The focus is generally on Baroque music, but the orchestra often explores works from other periods too, from early Baroque to early Romanticism. FiBO also plays contemporary music composed for period instruments, and has even commissioned several works itself. The musicians of the core ensemble often perform as chamber musicians. In its largest manifestations the orchestra can be heard playing symphony-orchestra repertoire and in opera performances.

FiBO regularly performs as orchestra in residence at the festive House of Nobility in Helsinki and tours widely across Finland. The orchestra also frequently performs at major Finnish festivals including the Helsinki Festival, the Kuhmo Chamber Music Festival, and the Turku Music Festival. Abroad FiBO has given performances at concert halls across Germany, Austria, Spain, East Europe and the Nordic countries.

Throughout its history, FiBO has been a forerunner in the Finnish music scene. Beginning life as the Sixth Floor Orchestra, it has played an important role in the emergence of the early-music movement in Northern Europe. As the orchestra has developed, FiBO’s exciting performances, creative programming and innovative projects, have caught the attention of concert organisers both in Finland and abroad. From widening economic support at home to growing popularity abroad, and with awards including Finnish Musical Act of the Year and Disc of the Year (Yle), FiBO continues to forge a unique path as a Baroque orchestra for the 21st century.

Moramoramor, the first album by FiBO Records, was released in November 2017 and has received a warm welcome. It contains the third and fifth Brandenburg Concertos by Johann Sebastian Bach, concertos by Vivaldi with the orchestra’s own soloists, and Jukka Tiensuu’s Mora, the first Finnish piece composed for a large Baroque orchestra. The second album by FiBO Records, Helsinki Window contains contemporary music for baroque instruments. The third album The Birth of The World contains early baroque and Finnish folk music and will be released in the autumn 2021.

“One could not ask for a finer, more resilient support for the soloists than the Finnish Baroque Orchestra, guests for the first time at the Nuremberg International Organ Week.” 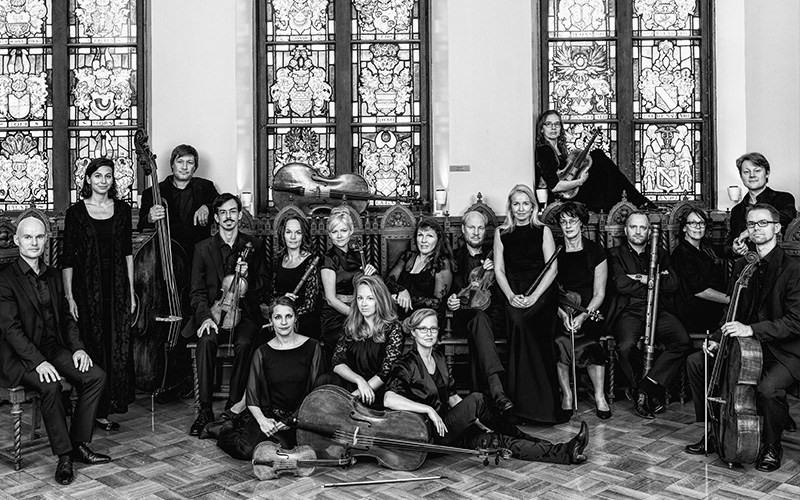